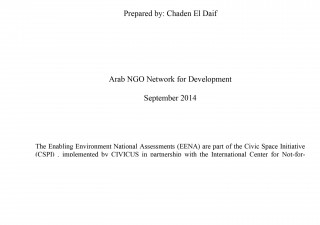 Overview of the Lebanese civil society: The examination of Lebanese civil society is of great interest as it discloses the capacity of Lebanese CSOs to adapt and serve in a continuously changing and unstable environment. They have managed throughout the years to be a transparent reflection of citizens‟ concerns. Lebanon is a democratic republic guaranteeing civil rights and liberties; however, an intimidating level of corruption exists. In addition, the country is affected by an unstable political system and strong sectarianism leading to severe divisions among civil society (these divisions reached their pinnacle with the 1975 civil war that lasted until 1990). The situation in Lebanon is best described by Khaldoun Abou Assi who was in charge of conducting CIVICUS‟ “Civil Society Index” study for Lebanon: “The Lebanese state is fairly oligarchic and is characterized by often unscrupulous political horse-trading. Paradoxically, in times of peace this has generated a rather large measure of liberty, democracy and respect for the rule of law compared to most other Arab and developing countries. At the same time, when the Lebanese system has broken down, it has not declined into dictatorship, but into civil chaos until a new equilibrium can be imposed” . Actually, Lebanese civil society went through major developments and tremendous changes. Originally dedicated to service provision, charity and war relief, CSOs nowadays are fulfilling additional mandates. Acknowledged as development partners, organizations‟ role shifted to policy making and human rights. Their interest in these domains is reflected by the emergence of developmental and advocacy organizations. Nevertheless, the space of manoeuvre required for service provision and charity is different and much wider than that of development and policy making domains since they deal with public policy matters. Furthermore, the current situation in Lebanon does not bode well for Civic Activism. Indeed, on the humanitarian front, the country is making history: compared to its population, Lebanon received the highest number of refugees in human history . In turn, this is straining the economy and creating non-negligible security dangers. On the other hand, a glance at the news stream emerging from Lebanon would give a rather gloomy portrait (explosions, women‟s rights violations, coercion of journalists, corruption etc…) and would predict hard times for CSOs. Nevertheless, more thorough insights also reveal very active organizations, and a wide array of NGOs and citizen gatherings. Consequently, conducting an in-depth study of the actual interaction between CSOs and their surrounding environment is, now more than ever, a necessity. By enabling environment, we mean the conditions within which CSOs are operating. This project aims in fact to assess the dimensions which influence and participate in defining this environment through a scrupulous examination of the legal, regulatory and policy background of the working conditions of CSOs. This report will scrutinize nine dimensions which are believed to define and affect the enabling environment for CSOs. Once taken together, the dimensions‟ outcomes and findings will allow us to draw a clearer vision. Structure: Five dimensions, described as mandatory, are believed to affect the enabling environment of CSOs in all States. Section III will look into the formation of civil society organisations (CSO‟s); which refers to the legal framework and the procedures required to establish a “legal” association. Once done, the report will focus in its section IV on the operation of CSO‟s i.e. the enabling and restraining factors which influence its ability to conduct activities and to achieve its objectives. Section V will examine CSOs‟ ability to access resources (funding). Resources condition its efficiency, independence and sustainability. Lastly, sections VI and VII will respectively assess the freedom of expression and the right to peaceful assembly. Freedom of expression refers to the possibility for civil society to freely express its opinion and to publicly assess public performance. As for the right to peaceful assembly, it is a main component of the freedom of association without which civic activism in Lebanon would be greatly reduced, as the country witnesses weekly and sometimes daily protests. Four additional dimensions were chosen by ANND and its Expert Advisory Panel (EAP) which was defined for the purpose of the EENA and provided guidance all through the research. CSO-State government cooperation is the first and a highly-important section (section VIII). CSOs nowadays play an important role in contributing to inclusive and pro-poor development. CSOs‟ mandate and role will remain incomplete without building strong and effective cooperation and coalition among organizations (section IX). In addition, the taxation regime (section X) can facilitate or hamper CSOs‟ operations. Last but not least, access to information (section XI) is the starting point of all advocacy and policy making activities. It is also central to democracy, holding the government and State's officials accountable by allowing the spread of a culture of informed citizenry.